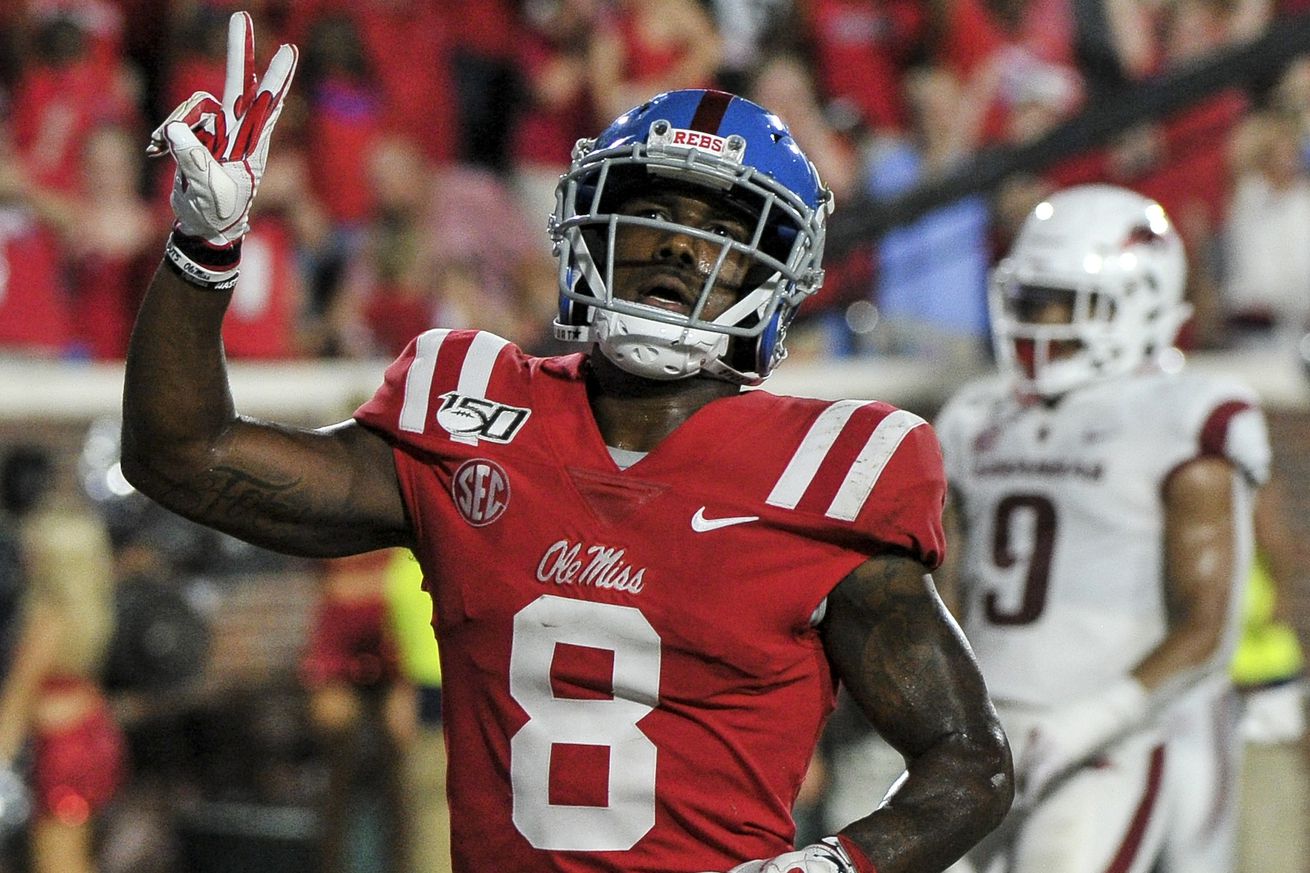 Alabama gets a test and Mississippi State’s encore

The big news within the SEC—and really all of college football—has been the return of the Mike Leach Air Raid offense, which just allowed Mississippi State to go-all scorched earth on LSU’s once-vaunted secondary. Quarterback K.J. Costello threw for over 600 yards in a stunning performance and vaulted his team into the college football rankings. But will that be a regular occurrence every week? Arkansas isn’t nearly as talented a team, but nonetheless it will be important for them to show consistency. Meanwhile, No. 2 Alabama will get their first real challenge of the season against No. 13 Texas A&M, who is fresh off a defeat of a scrappy Vanderbilt team.

Moore has to be considered a draft riser after his performance against Florida, even though he feasted a bit late in the game on a prevent defense. Catching ten passes for 227 yards is impressive no matter how you slice it. Now the challenge for the 5’9”, 185-lb receiver is to keep our attention by following up that performance. The Kentucky defense will be just as difficult, if not more so, than the one the Gators sported, so an equally successful day would be a great sign for Moore so early in the season.

Georgia has had an incredible pipeline of NFL talent when it comes to the running back position, and although he’s just a redshirt sophomore, White has the talent to be the next one in line. He didn’t get much attention last week, as he split time with James Cook and only received 13 carries. We’ll see if that holds true against a stout, physical Auburn defensive line that just did a pretty decent job against Kentucky’s rushing attack. White has the blazing speed to bust open a defense, so that bears watching.

At a listed size of 6’4” and 185 lbs, Jones is tailor made for a Seattle Seahawks-type Cover 3 system that asks defensive backs to beat up receivers at the line of scrimmage and cover the outside zones. His performance this week against Alabama’s slew of NFL-caliber receivers will go a long way to determining if he’s more of a developmental prospect or pro-ready to be drafted in the first couple rounds.

A graduate transfer from Rutgers, Maietti is small for the position at 291 lbs, but is a smart, savvy player. The Tigers’ offensive line had a tough time last week against Alabama, specifically linebacker Dylan Moses, so it’ll be worth tracking how Maietti gets up to the second-level to block an active group of Tennessee linebackers that form the heart of their defense.

N.C. State’s defense has struggled mightily this season after they lost some good players to last year’s NFL Draft. Moore remains one of the focal points however, and was extremely active against Virginia Tech, to the tune of nine tackles, a sack and two tackles-for-loss. He’ll need to be even more effective against Pitt, as their team defense is one of the best in the country and the game has the look of a defense struggle.

With a reloading Alabama and LSU, along with a resurgent Mississippi State, the SEC looks more open than it has in years. The matchup may decide the true contender for the conference championship.

With an offense dominated by underclassmen, Georgia’s best prospects are on defense, particularly in the secondary. Cornerbacks Tyson Campbell and Eric Stokes need to be more consistent, but both have the look of second-round picks, while ball-hawking safety Richard LeCounte came down with two interceptions just last week.

The battle between that Georgia secondary and the Auburn skill positions is the real draw, although quarterback Bo Nix is not draft eligible. Nix will be throwing to a couple of very talented receivers in Anthony Schwartz and Seth Williams. Williams is the big, physical receiver, while Schwartz is known for his blazing speed.