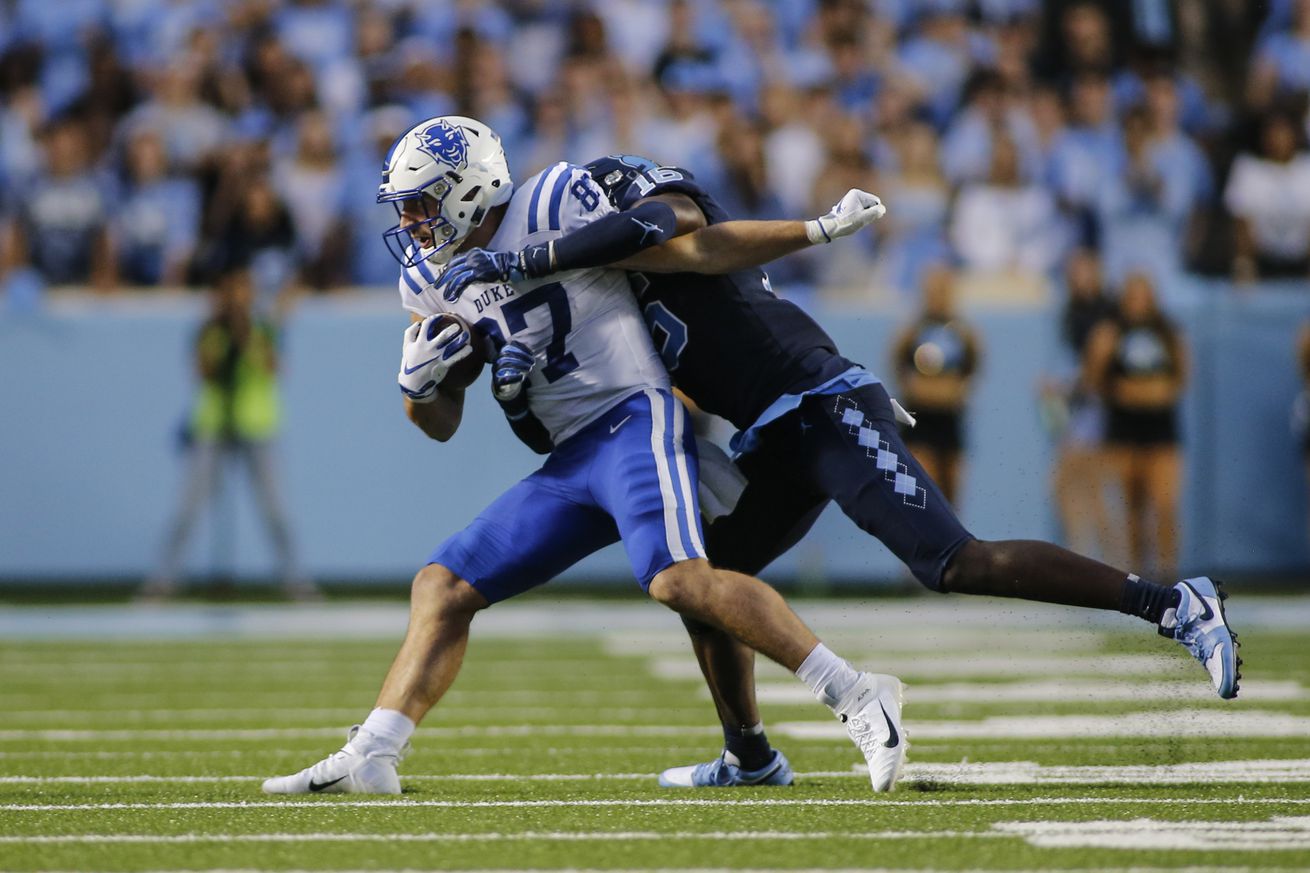 This week features the first game between ranked teams

We’re on to Week 3 of the college football season and we finally get to see our first game between two ranked ACC teams, in prime time no less. No. 17 Miami travels to take on No. 18 Louisville. Both teams seem to be resurgent, and easily handled their first opponents. In fact, ACC match-ups dominate another week, with Syracuse looking to bounce back against No. 25 Pittsburgh following a terrible loss to North Carolina, and Wake Forest looking to rebound from its loss to Clemson by beating N.C. State. If you don’t like that, at least this will be the last week without the SEC and Big-12.

But, hey, let’s talk about the games, leave questions on prospects, and enjoy the weekend!

Duke was able to hang with Notre Dame for a while in their game thanks to Clemson transfer quarterback Chase Brice and his favorite target, Gray. He led the team in catches and finished with 68 yards. Bigger things should be expected this week against Boston College, who sports a strong pair of run-stopping linebacker in Max Richardson and John Lamot, but their pass defense has yet to tested. Gray is such a fluid route specialist and has decent enough speed to have a big game.

It was a solid debut for Miami for the former Temple player, who finished with four tackles, a sack and a tackle for loss against UAB, but this week represents a step up in competition. Louisville loves to push the ball down the field with their talented receiver corps, so Roche will have plenty of opportunities to show off his pass rushing skills. Plus, the Cardinals’ left tackle struggled last week against Western Kentucky, so the runway is clear for Roche to have a monster game.

Pitts’ long time center, the senior has been a rock for the team and a catalyst for the run game. His movement skills are top notch, and it appears he has a nice pair of long arms, but he looks like he lacks some necessary core strength. Syracuse’s defensive line had a surprisingly strong performance against the run in their first game of the season, so this game should serve as a decent test for a player looking to be drafted in the middle rounds.

With Gabriel Davis now in Buffalo, Nixon is being looked upon to fill his role for the Knights. Similar to Davis, he’s a bigger receiver who nonetheless specializes in downfield receptions. He finished last season with 830 yards and seven touchdowns. In this week’s game against Georgia Tech, he’ll likely be shadowed by talented cornerback Tre Swilling, who was held out of last week’s game, due to injury.

Williams had a strong debut season in 2019, with 73 tackles, five tackles for loss and two interceptions, and is looking to improve on those numbers this year—his senior year. He’s likely to be tested early and often this week against Baylor, which sports a veteran quarterback in Charlie Brewer and two productive receivers in Tyquan Thornton and R.J. Sneed. Sneed alone had 42 grabs last year.

Williams’s teammate, and the real star of the Houston secondary, is Anderson, the former five-star recruit transfer from Ole Miss. Although he’s extremely athletic, he didn’t light the world on fire his first year with the Cougars and will be looking to fully emerge into the draft conversation this season. A strong performance against Baylor would be a good start on that front.

This has all the makings of a really intense game between two theoretically explosive offenses, and defenses with a smattering of prospects worth paying attention to.

Miami will be looking to ride its dual-threat, transfer quarterback D’Eriq King, with the help of tight end/H-Back Brevin Jordan. Undersized, Jordan basically is a big receiver in the slot. The bulk of the work will fall on running back Cam’ron Harris though, who can do a little bit of everything. On defense, the Canes will rely on the aforementioned Quincy Roche to wreak havoc along the offensive line.

Louisville has a big-play offense predicated on its wide receiver corps that features Tutu Atwell and Dez Fitzpatrick. Atwell is the speedy deep threat and Fitzpatrick is the lanky possession wideout. On defense, it’s all about their speed at the linebacker position, with Rodjay Burns and C.J. Avery. Both are primarily coverage linebackers.