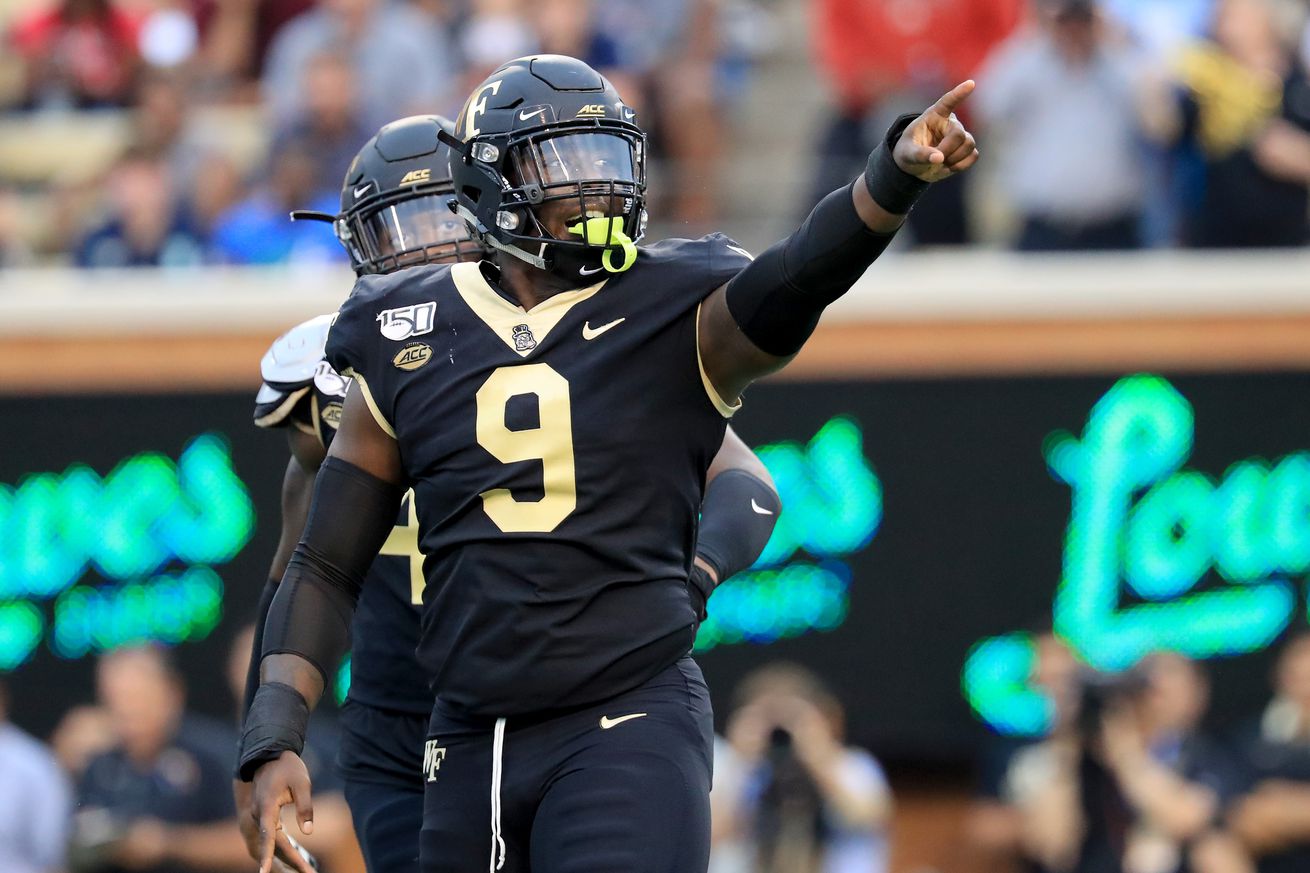 Last weekend was just an appetizer, but now begins the weekly main course of college football, with the notable exceptions of the Big Ten and Pac-12.

The intriguing games in Week 1 feature a heavy dose of the ACC. Things start off with an exciting match-up between Syracuse and No. 18 North Carolina to see who can offer a challenge to Clemson in the Atlantic Division of the ACC. The action continues in that conference as the rebuilding Georgia Tech Yellow Jackets take on the also rebuilding, but still incredibly talented, Florida State Seminoles. Finally, the must-see game of the weekend will be between No. 1 Clemson and Wake Forest, who have been somewhat gutted by opt-outs and transfers.

As I always like to say: Let’s talk about the games, leave questions on prospects, and enjoy the weekend!

Basham could have come out and possibly became a first-round pick last year, but instead he’s looking to this season to establish himself as a top-15 player. He’s primarily a power rusher who flashes an inside counter move that can lift tackles off their feet. Despite being a bigger pass rusher at 6’5” and 285 lbs, he’s still freakishly athletic. Clemson’s left tackle, Jackson Carman, is experienced and an NFL draft candidate in his own right—so he won’t make it easy on the senior.

The Yellow Jackets’ defense was awful last year, but Swilling was absolutely one of the bright spots. The son of former New Orleans Saints linebacker Pat Swilling, Tre put some great tape out last year and somewhat quietly led his team in pass breakups. This week he’ll be facing down big Tamorrion Terry from Florida State, who finished last season with 60 catches for 1100 yards and is looking to emerge as a high draft pick.

Surrat is an amazing story: A former quarterback, the senior switched positions to linebacker and is now one of the most feared ‘backers in the country. His violent attacking of the line of scrimmage makes you think he’s been playing the position for years, but in reality he’s still learning. He’ll likely be considered a top-four player at his position by year’s end. Against Syracuse, he’ll be tested in coverage on shorter passes and by the Orange tempo. This game will be all about quick decisions and reactions for the young man.

The senior tackle’s season will be all about proving he should be considered a first rounder, and how he protects quarterback Ian Book this week against the Duke Blue Devils and their rising pass rusher Chris Rumph II will go a long way in determining that. Eichenberg had some technical weaknesses to clear up last year, and it wouldn’t hurt if he was able to put on some weight in the offseason.

Walker is the Hilltoppers’ work-horse back (took 92% of snaps at running back), and although he doesn’t really have outstanding physical traits, his vision in the hole and his jump cut make him an intriguing talent nonetheless. He’ll likely be asked to carry the load against Louisville, which sports a defense somewhat known for their tackling in both the linebacking corps and in the secondary.

Clemson is surely looking to return to the College Football Playoffs this season but, to do that, they need to make mincemeat out of their rivals in the ACC. Wake Forest has been a solid team in the past few years, but have been dealing with an exodus of offensive players due to opt-outs and transfers.

Clemson is a massively talented team on both sides of the ball. Of course, it starts with quarterback Trevor Lawrence, who is likely to be an extremely high draft pick next April. Running back Travis Etienne is an elite prospect in his own right, who compares to a bigger C.J. Spiller. On defense, they’re looking for various talented players to emerge, including edge rusher Xavier Thomas.