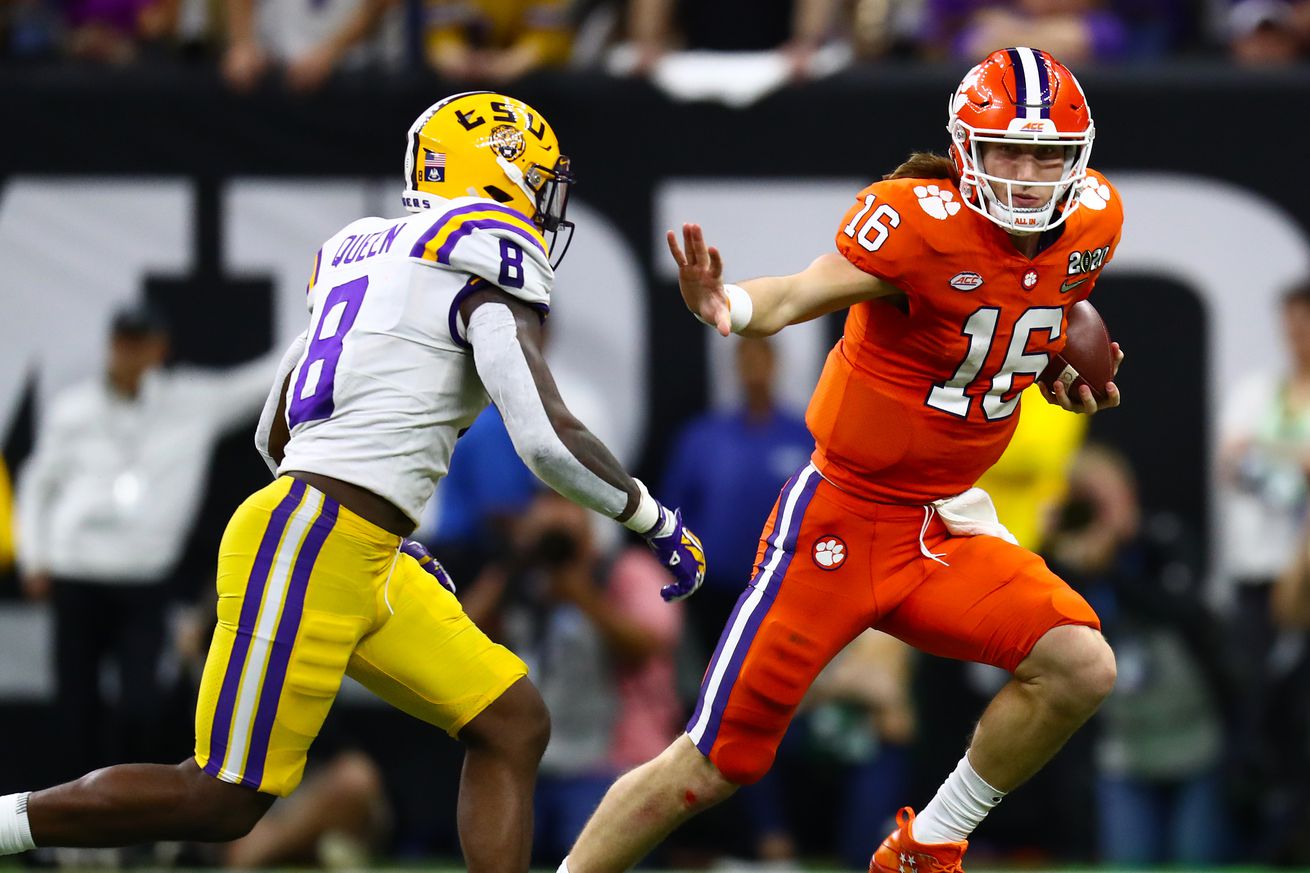 With Week 1 of the 2019 college football season set to premiere on Saturday, it’s once again time to look ahead and preview what the 2021 NFL Draft should look like in the spring—in terms of talent at specific position groups. Today, we begin with the offensive side of the ball.

Last year’s draft was notable for its vast group of upper-echelon receivers, which saw eight wideouts drafted by the 34th selection. 2021 looks to be the same on that front. Teams dealing with a dearth of offensive line talent should also be heartened by this year’s class. On the flip side, aside from the top three players at the position, it’s hard to imagine a quarterback emerging from the middling mire.

At this early stage, the 2021 pack of quarterbacks is led by three players: Clemson’s Trevor Lawrence, Ohio State’s Justin Fields and FCS phenom and North Dakota State’s Trey Lance. Thanks to his immense talent, Lawrence has been a projected first-round pick for some time. Fields’s situation is up in the air, as the Big Ten voted to delay their season due to the COVID-19 pandemic. Who knows if he will get a chance to build on his breakout 2019 season. North Dakota is so dominant at their level that Lance doesn’t get to pass much but, like the aforementioned Lawrence, he has all the arm and mobility that will entice NFL teams. Beyond those sure-fire options, it’s almost anyone’s guess as to who will emerge. Iowa State’s Brock Purdy is intriguing as a tough, gamer-type passer, but he needs to show more consistency with things like ball placement. Former Wake Forest quarterback Jamie Newman could emerge from his competition to lead Georgia, but he needs to prove he can operate a truly complex offense.

Although the “first-round running back” seems to be a dying breed—only Clyde Edwards-Helaire was taken in the first round last year—perhaps that trend will reverse course in 2021. I often compare Clemson’s Travis Etienne to a bigger C.J. Spiller—a rare type of home-run hitter. Chuba Hubbard of Oklahoma State has that vision and decisiveness to be a slam-dunk fit for any team that likes to run zone concepts. Then there’s Alabama’s Najee Harris who is a complete player, with contact balance, long speed, catching—everything. This is by no means a top-heavy class as well, with solid middle-round prospects like Memphis’ Kenneth Gainwell and University at Buffalo’s Jaret Patterson. Both are hugely productive tailbacks.

On the heels of a year when such a plethora of wideouts went in the first round, it’s easy to assume that there might be a bit of slow down this upcoming year. That is by no means the case because this group is just as deep and talented. LSU’s Ja’Marr Chase is the leader in the clubhouse, earning comparisons to De’Andre Hopkins and Anquan Boldin. Then there’s the Alabama tag team of route specialists Jaylen Waddle and DeVonta Smith. Over in the Big Ten, Purdue sports the speedy and physical Rondale Moore, while Minnesota’s Rashod Bateman has the ideal blend of size and strength to simply body opposing corners. Newly opted out, the former Wake Forrest Demon Deacon Sage Surratt is your contested catch specialist. Each one of the above names could emerge as a first rounder, and that’s only the scratching the surface. If your team missed out on wide receiver last year, the can make it up in 2021.

2020 was a down draft year for tight ends, with only one being taken in the first two rounds. That’ll likely change this year, because Florida’s Kyle Pitts is special. He’s like if an elite wide receiver inhabited the body of guy who’s 6’6” and 240 lbs. He also has the frame to add weight and help his blocking. He’ll likely be joined in the first round by Penn State’s Pat Freiermuth. He’s a well-rounded prospect without many weaknesses, although he won’t ‘wow’ you in any one area, outside of his suction-cup mitts. Outside of those two, some solid middle-round prospects include BYU’s Matt Bushman (who offers some rare positional flexibility), and Miami’s Brevin Jordan body type and play style reminds me of another former Hurricanes’ tight end, Chris Herndon.

Coaches and commentators alike decry the scarcity of offensive franchise tackles. Luckily the 2021 draft might come to the rescue, which includes sure-fire top-ten tackle Penei Sewell of Oregon. He has virtually no weaknesses in his game, and won’t even be 20 years old until October. After Sewell there’s a bit of a log jam between Texas tackle Samuel Cosmi, the Crimson Tide’s Alex Leatherwood and Stanford’s Walker Little. There are plenty of potential risers as well, a group that includes North Dakota State quarterback Trey Lance’s blindside protector Dillon Radunz and Notre Dame’s Liam Eichenberg, who’s rock-solid in pass protection.

There promises to be at least a couple difference makers at guard and center in 2021. Tennessee guard Trey Smith is just a massive people mover at 6’6” and 330 lbs, and despite not having the same elite size, Ohio State’s Wyatt Davis has exceptional power and strength at the point of attack. Davis earned comparisons to David DeCastro via Daniel Jeremiah recently. At center, Iowa’s Tyler Linderbaum is still learning the position after switching from defensive line, but his high-end athleticism should carry him through. Then there’s Oklahoma’s Creed Humphrey, a former wrestler who’s smart and really knows how to utilize blocking angles.