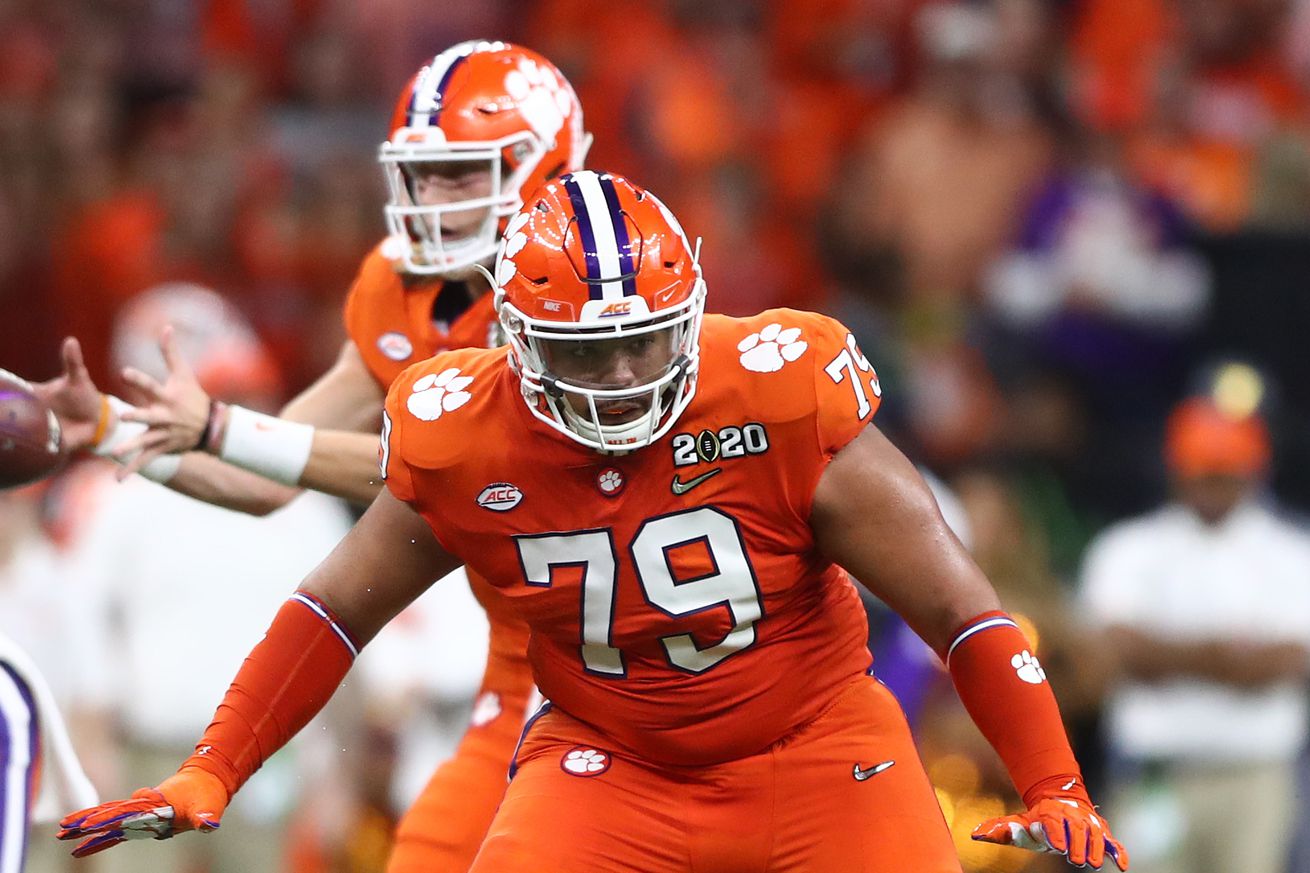 Week 1 of the college football season is in the books and if one thing is for certain, it’s that the Big-12 shouldn’t mess with the Sun Belt. Both Arkansas State and Louisiana-Lafayette upset Kansas State and no. 23 Iowa State respectively and, coupled with a strong Appalachian State performance against Charlotte, the conference looks very dangerous. Meanwhile, Georgia Tech’s defense locked down highly-touted new coach Mike Norvell’s Florida State offense, despite starting an experienced quarterback in James Blackman. Below are the prospects who stood out during Week 1.

The Clemson left tackle performed whatever task was required of him, opening up running lanes for Travis Etienne and keeping Trevor Lawrence clean throughout the day. He has a nasty punch that he used several times on the opposing defensive end that Etienne was able to exploit for big gains. Lawrence was only sacked twice in the game, despite Wake Forest having a strong pass rush, and neither were Carman’s fault. More games like this will start to get the draftniks buzzing.

Harris added strength in the offseason and is seen as more of a punishing runner, but was able to defy the scouting report on him after breaking off a huge 66-yard touchdown run. Outside of that considerable play, he was a reliable option for the Hurricanes in the running and passing game, including even pass protection. That’s an important area in evaluating NFL running backs and his presence in that particular area helped keep quarterback D’Eriq King almost perfectly clean. He finished the game with 134 rushing yards and two touchdowns.

With Justyn Ross injured for the season, the Tigers need one of the wide receivers to step up. Rodgers certainly did that against Wake Forest, as the diminutive receiver caught “only” five passes, but went for 90 yards. He was the main target for Lawrence, and his quickness on slants, crossing routes and even wide receiver screens was evident. His strong hands also stood out, which is something that can’t always be said for most inside receivers. He also probably would have had even more production if Clemson didn’t start playing their backups.

Malone essentially was the entire Hilltoppers’ defense, as he proved to be unblockable by the Louisville offensive line. Looking at him, you wouldn’t think the 230-lb end would be able to match up with big offensive tackles when pass rushing, let alone in containment against the run, but Malone had multiple pressures all throughout the contest and finished the day leading his team in tackles to go with a sack, three tackles for a loss, and a forced fumble.

Simply dominant. Sample plays multiple roles for the Green Wave and played each of them well against South Alabama. The senior stuffed the stat sheet, ending the night with seven tackles, three tackles for a loss, two sacks, two quarterback hurries, and a forced fumble. Although it didn’t look like he could bend like a true edge rusher, his ability to use his strength and his quickness off the snap was just too much for the South Alabama offensive line, who were basically bullied.

The fact that Florida State lost their game against Georgia Tech, despite the game Samuel had, is straight up embarrassing. The son of the former New England Patriots cornerback of the same name, Samuel played lockdown and demonstrated his ball skills all day—with two passes defended—and came down with two massive interceptions as well. The first one was a smart play when he followed the quarterback’s eyes and stepped in front of the under-thrown ball, returning it 38 yards.